This last weekend was the first ever fully-legal 710 Cup, in Denver. The event included an extensive competition, educational panels, live art, glassblowing, three music stages, a marketplace dedicated to concentrates, equipment, art, dab culture, and dabbing. Here are the highlights of the event:

10) Orpheo & the Wrench The Grassroots Stage offered more musical variety than the two other stages, which were primarily dance whomp and wub wub wub DJs. Orpheo & the Wrench, a Denver based acoustic duo, played an enjoyable set and the most surprising part was their homespun spoof of “The Devil Went Down To Georgia” telling a tale of the Devil going to Denver and getting smoked out. I was squealing with laughter.

9) Caps! Sporting a flat brim baseball cap, preferably a limited edition or one of kind painted cap, is essential for a casual, yet savvy, look for young men and women. Event sponsor, Grassroots California and Illinois based, Visual Fiber both had the most vibrant and extensive cap collections to choose from.

8) Green Man Cannabis Denver dispensary, Green Man Cannabis, has colorful and appealing T-shirts and stickers. Their booth was a fun stop in the vendor row. You could try to win a T-shirt of your choice in a modified corn hole game. You could yuck it up and have your picture taken with a bong smoking Jack Herer stand-in. The free “got THC?” temporary tattoos were a fun alternative to stickers.

In the Jack Herer cutout, smokin’ a bong!

7) Mahatma/Strainwise Mahatma, a Denver concentrate company, and Strainwise, a family of dispensaries, had a sleek, professional and comfortable booth in a spacious 10 x 20 tent. The booth was open and provided shade and a space to chill. Their booth had a tall dab bar, black leather couch and love seat, and a large urn of medicated iced tea. The 6 Million Dollar Man was comically posed with Mahatma’s 2013 Cannabis Cup for Best Concentrate on the dab bar.

The 6 Million Dollar Man posed with Mahatma’s 2013 Cannabis Cup for Best Concentrate on the dab bar.

6) Sohiyo Sohiyo, a California-based clothing and merchandise company, will outfit you in dab culture coolness. Sohiyo had lightweight and eco-friendly bamboo sunglasses and bold Brandalism Stickers and T-shirts, among other items.

5) The Green Team The do-good Green Team from Denver Relief walked the event site and kept the grounds clean to ensure cannabis events have a positive impact in the community by keeping things green and clean.

The Green Team, keepin’ it clean!

3) Collaborative street art mural Local artists Berk, Plaant and Sypages, painted the white side of an RV bus over the two-day event into a 710 Cup race car scene with the mascot driver winning the race and the other characters celebrating victory with a flaming torch and dab. The plaid cat is just stone cold chillin’. 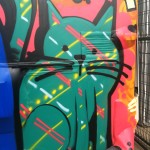 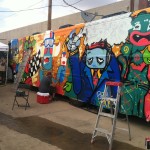 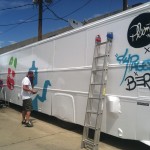 2) Hitman Glass Hitman Glass, maker of rigs and pipes, has taken Brandalism and run with it. Brandalism is common in dab culture and Hitman Glass turns dozens of recognizable cartoons and product mascots into Hitman Glass advertisements. Ready for an epic guerilla marketing campaign, stickers, T-shirts and hats of the Monopoly Man, Popeye, Toucan Sam, Calvin and Hobbes, Garfield, Rocky and Bullwinkle, Felix the Cat, Tom and Jerry, Pacman and dozens of other familiar characters hold a dab rig and covertly advertise the underground world of dabbing and Hitman Glass.

1) Mila Jansen, the Queen of Marijuana. Mila Jansen, an inspiring woman and a cannabis pioneer, was onsite as a keynote speaker and an international judge for the solvent-less hash competition. She was presented with the Female Industry Achievement Award, by her most prolific student, Nikka T. of Essential Extracts. To find out more about her life and achievements, watch her film, Mila’s Journey, a recent documentary that explores several decades of Mila’s life, including her role in couture fashion, her life in India, the development of her cannabis career, and the lifestyle choices she made being a mother of four children.