Seattle Hempfest event coverage  for The Hemp Connoisseur. See the published photos and article  at the magazine link. http://issuu.com/thcmag/docs/september2013_condensed

This version includes a Best of Vendors coverage with unpublished event photos.I Lo

Seattle Hempfest is the largest cannabis event in the world. This year’s Hempfest was the first since the passage of I-502, Washington’s marijuana legalization law, and a quarter of a million people came to celebrate. During the third weekend of August, with hot and sunny weather, Hempfest occupied a mile and a half of Myrtle Edwards Park in downtown Seattle. Within the safety of Hempfest, people smoked, vaporized and consumed cannabis in public. Occasional cooling sea breezes wafted along the beautiful waterfront, joining the hovering cloud of freshly smoked marijuana. With a hundred bands and a hundred speakers entertaining and informing from six stages, and four hundred booths of vendors and nonprofits to visit, there was plenty to see and do at Seattle Hempfest this year.

Sit on the grass and smoke some grass.

The grass in Myrtle Edwards Park is a comfortable spot for a smoking sesh with friends. Hempfest’s crowd was reveling in public pot smoking as people with 4, 6 and 12 foot bongs sat toking up with a little help from their friends. Others were walking around flashing their newly purchased pieces. Stony and relatively subdued, the crowd enjoyed the surreal and liberating experience of not having to publicly hide their appreciation of cannabis. 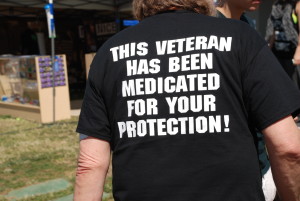 The waves of people walking were decked out in fancy and casual hemp and pot leaf fashions. Wearing a pot leaf or cannabis message T shirts, or pot leaf accessories, is practically ubiquitous in this scene (my personal favorite T shirt message was “This veteran is medicated for your protection.”)  Other cannabis enthusiasts were decked out in bright necklaces, hats, sunglasses, scarves, socks, everything in their wardrobe adorned with pot leaves. Occasionally, someone was dressed in formal wear or fantasy fairy and animal costumes. Topless women sported pot leaf pasties and young families walked through the festival site with strollers. 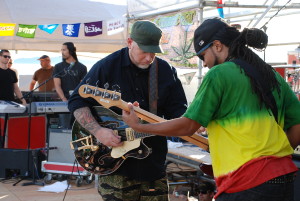 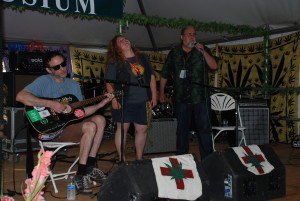 Boris and the Waterboarders protest with vicious humor at the Hemposium stage. 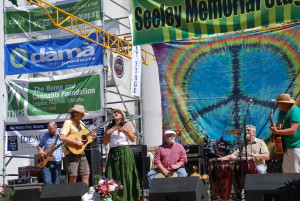 Area bands and musicians made up most of the musical entertainment at Seattle Hempfest. Bands played short sets and the genres were ever changing, going from reggae, to salsa, rock, punk, country rock, hip hop and electronica. Bellingham rockers Boris and the Waterboarders played songs of political protest and personal despair to the amused delight of the carefree crowd. Friday’s main stage afternoon acts were the Seattle Hempfest favorites, The Toyes, originators of song “Smoke Two Joints” and reggae groove house band, The Herbivores. Hempfest’s main stage featured nationally known acts Everlast and DJ Muggs of Cypress Hill. Hiphop rock fusion artist Everlast played to a crowd of “the most stoners I’ve ever seen in one place”. The mellow crowd pumped their fists and sang along with notable songs, I Get By”, “What Its Like” and a record scratching version of Johnny Cash’s “Folsom Prison Blues”. 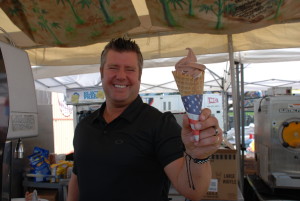 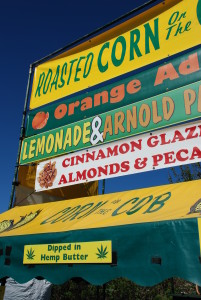 Corn on the cob dipped in hemp butter for Hempfest

Get the munchies and eat hemp food.

There were plenty of food options to satisfy the munchies of everyone at Hempfest. Make it hempy by sprinkling on a tablespoon of Hemp Hearts, or order hemp protein powder added to a fresh fruit smoothie. Food booths offered typical festival food hotdogs, bratwurst, burritos, and French fries and meals with a hemp twist with hemp burgers, corn on the cob dipped in hemp butter or hemp coffee.

For dessert, fresh mini donuts, or scoops of Ben & Jerry’s and Baskin Robbins were tasty dessert options. Make it hempy with a waffle cone of soft serve hemp ice cream from Munchie Market.

Another snack option was provided by the Seattle Police Foundation. Seattle Police were giving away snack bags of Nacho Cheese Doritos with an attached informational sticker at Hempfest.  The stickers humorously explained the new regulations under I-502 with  funny reminders of “Don’t give, sell or shotgun weed to anyone under 21” and encouraged the crowd to enjoy Hempfest and “listen to Pink Floyd’s Dark Side of the Moon at a reasonable volume”.  Warning, The chips are as delicious as they appear! 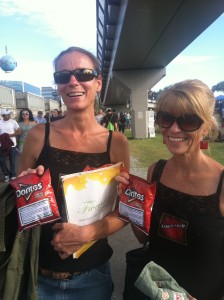 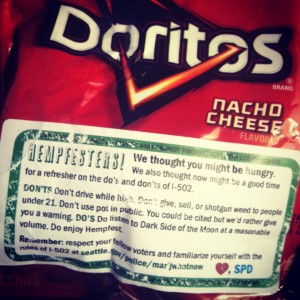 The bustling marketplace at Seattle Hempfest featured 400 vendors selling the gear and equipment required to consume, grow and live a cannabis life. These are the best hemp and cannabis lifestyle clothing options currently available.

HempMania, a fair trade and eco-friendly company since 1997, makes durable hemp bags and wallets for men and women. The wide variety of back packs, purses, market totes, wallets and accessory bags are available in pleasing earth tone colors and black. 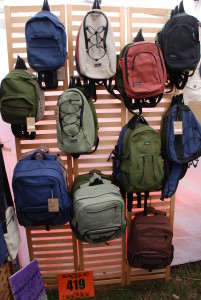 Hemp bags for all at Hemp Mania!

Seedless Clothing was set up with a bright green booth and stacks of street art savvy t-shirts, shoes, hats, hoodies, jackets, belts, jeans and stickers. Seedless, a California based cannabis lifestyle clothing company, with its sprouting leaf logo is worn by the cool kids. 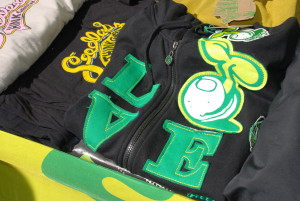 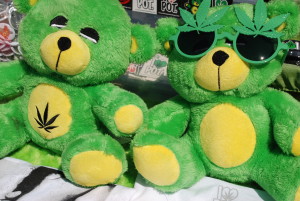 Urb Age Designs, is owned by Urb Thrasher, hard rocking DJ on 420Radio.org. Urb Age Designs has a variety of Rasta inspired screen-printed T shirts, barware, a Frisbee and disc golf line, and other lifestyle products to show off your love of the herb. 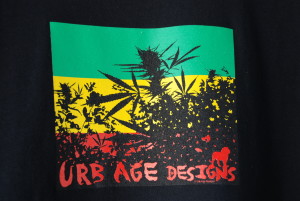 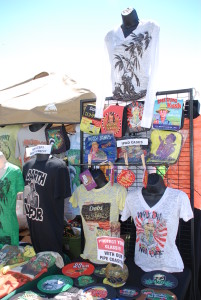 Good Life Roots is a Los Angeles based artist collective. Artists create original screen-printed T shirts and decoupage art on wallets, flasks and purses. The Good Life Roots crew then heads out on its summer vending tour going to a medley of festivals and markets throughout the season. 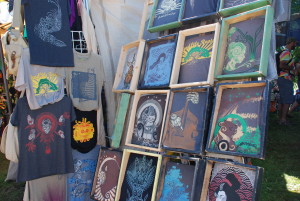 Good Life Roots, an artist collective with a seasonal vending calendar across the country

Seattle Hempfest merchandise booth In addition to being a general store, event merchandise sales is a fundraiser for Seattle Hempfest to cover the event production costs. This year’s event image, to celebrate I-502, was Uncle Sam passing a blazing joint. This iconic image is available on cotton or hemp shirts, posters and magnets.

The Hemp History Roadshow for college campuses had its informational hemp tutorial, open for education, showing the many applications for hemp in foods, building materials, fashion, body care, home goods and sporting goods. Visitors could see hemp in raw fiber materials, plastic composites, hemp food, and hemp clothing.  A small store of T shirt and hats and educational DVDs was on display in the hemp hut. 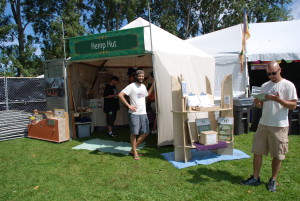 Seattle Hempfest had some notable cannabis culture on display. The cross country  adventures of the painted psychedelic Further (original spelling “FURTHUR,”) bus driven by Neal Cassady, captained by Ken Kesey and boarded by psychedelic pioneers the Merry Pranksters was parked near Hempfest’s main stage.  This hand painted magic bus is part of the Rock n Roll Hall of Fame. 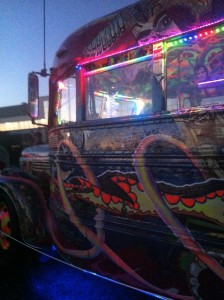 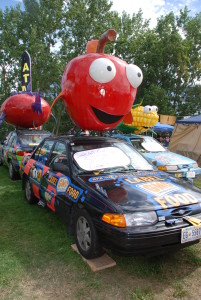 Other art cars onsite was the Dr. Bronner’s Magic Soaps sponsored fleet of cars topped with giant fishy GMO frankenfoods. These fishy food cars came from WashingtonDC to Seattle for Hempfest to raise coast to coast awareness for labeling GMO foods and to educate voters on an upcoming GMO ballot issue in Washington.

Speakers, encourage, engage and inform the crowds in between band setups.

Here’s a list of the notable hemp speakers at this year’s Hempfest:

Authors Chris Conrad (Hemp: Lifeline of the Future), and Todd Dalloto (The Hemp Cookbook: From Seed to Shining Seed)

Hemp legislative advocates Steve Levine  Director of Hemp Industries Association and Vote Hemp  and Paul Stanford, Director of the Campaign for the Restoration and Regulation of Hemp.

This year’s Seattle Hempfest was a liberating and fun experience, but beyond that, it was educational. For one magical weekend Seattle’s Myrtle Edwards park was alight with music, food, vendors, speakers, and endless opportunities to learn and appreciate the cannabis plant. 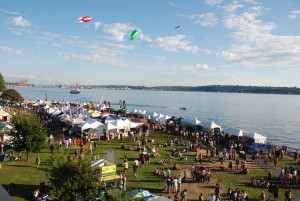